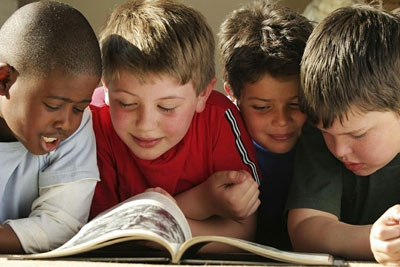 Sounding out simple words and correctly writing letters are paramount skills to Kindergarten success. With a solid foundation in each of these skills, students will have the early tools they need for excelling in school. Yet not all preschools emphasize these skills, and not all children even attend preschool. As a parent, there are several techniques you can do at home to help your child build these core skills. Grab some note cards, markers, colored sand, and a cookie sheet — and read below for some fun, engaging, and of course educational activities that you can do at home.

Decoding
Learning to decode, or sound out words is a very important skill for school success, and one that is emphasized in many Kindergarten classrooms. Before students can decode words, however, they need to learn the names of each letter of the alphabet and their corresponding sounds. By doing so, they can then learn to blend these sounds together to read words. Try following the tips below to teach your child these skills, and remember to always keep the activities fun, engaging, and multi-sensory!

Audio-Visual Cards
Start by teaching your child groups of five letters at a time: four consonants and one short vowel. Begin with some of the easier letters/sounds to master: for example, f, p, s, t, and the short vowel a. For every letter that you introduce, create a colorful note card with the letter on the front and a key picture that begins with that letter on the back. For example, for the letter f, you would write the letter f on the front of the card with a black marker, and you might use “fish” as your key picture. Thus, you would draw (or print from your computer) a colorful picture of a fish on the back of the card. Feel free to add lots of colors and have your child help in this process! (see the example below). Create similar note cards for all letters in this group. You might use “pizza” for p, “sun” for s, “top” for t, and “apple” for a.

Card Drill
Now it’s time to start the letter and sound learning process! Hold the letter side of the first card up to your child (in this case, f), and using as close to the following language as possible, say, “This is the letter f, like fish (flip card around), it makes the sound /f/ (flip card back around).” Then have your child repeat that sequence to you. Finally, the goal is for him to repeat that sequence back to you three times as you reverse the card for the picture name and turn it back around for the sound.

Sky writing
Once you have completed the audio-visual card drill with your child, you are ready to start the letter formation process with sky writing. You should model the formation of the letter first (we’re still on f), by holding your hand in the air, and, using your pointer and middle fingers, say out loud as you draw, “When we write the letter f, we go around, down, and across.” Make sure you draw a big letter in the air as your child watches. Next, your child should repeat the same motion in the air with you. He can even stand up while drawing to engage gross motor muscles. Finally, the goal is for him to draw the letter in the air three times, without your help or modeling.

Sand writing
Most children love this next step – sand writing! Pick up some colored sand from an art supplies store and pour it onto a cookie sheet or large plastic plate. You can even use kitchen salt or sand from the beach. Using your pointer and middle fingers again, model the formation of the letter – in this case f – in the sand, as your child watches. As you trace, you say out loud (for the letter f), “around, down, and across.” Then shake the sand and have your child trace the formation with you in the sand. Again, the goal is for him or to trace the letter independently three times. You can try this exercise with flour while you are cooking, sand while at the beach, or dirt in the park. Have fun with it!

Paper writing
Using a sheet of Kindergarten lined paper, draw dotted lines for each letter and have your child trace each letter ten times. Then have him or her try to write it alone ten times, without tracing.

Putting it all together
Follow that same sequence of activities for every letter in the group you are working on. For example, do a card drill, sky writing, sand writing, and paper writing for the letters f, p, s, t, and a (or n, r, c, k, e, and so on). Then, once you have finished the exercises for that group of letters, put your cards back into a pile and it’s time for review! Hold each card up separately to your child and he or she should be able to tell you, without guidance, the name of the letter, picture, and sound (for example: f, fish, /f/; p, pizza, /p/, and so on). If you notice any difficulties, practice the steps above again.

Reading
You have now reached the most exciting part – reading! Once your child has a fluid knowledge of the letter names and sounds of at least one group (four consonants and one short vowel), you can work on teaching your child to blend those letters for form words – which, in essence, is reading. For example, place the a card in front of your child. Ask him or her to tell you the sound that a makes. Then put the t card next to the a card and ask your child what sound t makes. Since we know that a says /a/ and t says /t/, what happens when we blend those sounds together? We form the word “at!” Now try that exercise with different letters from that group. For example, hold out the a and p cards to form “ap” (the words can be real or nonsense). Eventually, add in a third letter – /p/ /a/ /t/ reads pat! You can also add in magnetic tiles, blocks with letters on them, and white boards to make this exercise even more fun.

With ample practice and reinforcement of these exercises, your child will be reading sooner than you may have ever imagined! Remember to keep these exercises fun, creative, and as engaging as possible. The more you practice, the stronger these early literacy skills will become for your child, and the more excited he or she will be to start Kindergarten.

Dr. Emily Levy is the Founder and Director of EBL Coaching, which offers one-on-one tutoring and intensive summer programs. For more information, visit www.eblcoaching.com or call 212-249-0147.